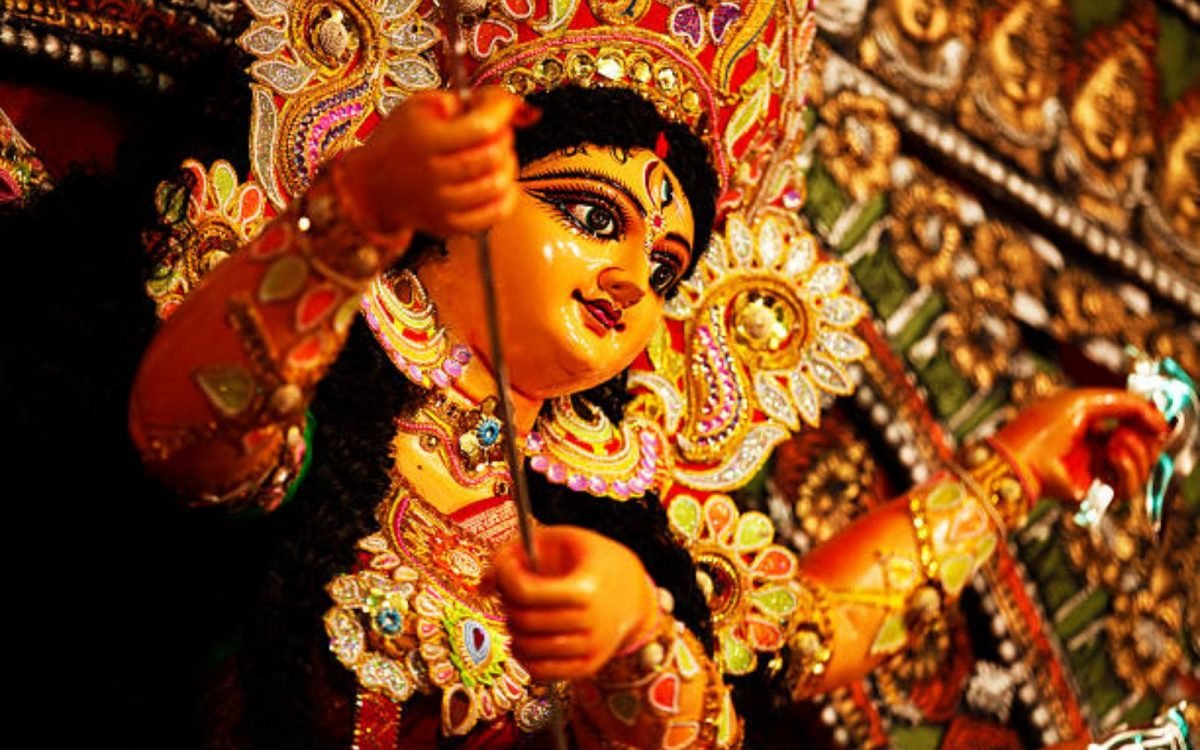 Navratri is an important Hindu festival that is full of excitement and a time for family and friends to come together and celebrate with great joy and happiness. Navratri is a Sanskrit word that translates to “nine nights”. During these nine nights and 10 days, nine forms of Shakti Devi are worshiped. The 10th day is known as Dussehra. Navratri comes twice a year and is celebrated with great joy and happiness. This year, i.e. in 2022, Navratri will start on September 26th.

Navratri is an important major festival in Hinduism that is celebrated as Maha Utsav all over India. The Goddess Shakti is worshipped in nine forms during the nine nights of Navratri. A new avatar of the goddess is worshiped every single day which is associated with Navratri. There is a Great Story of Devi Durga which is the Battle between Devi Durga and the Demon Mahishasura.

There was a demon king, Mahishasura. He performed severe penance(Tapasya) to please Lord Brahma because he wanted to be powerful and rule the three worlds. Therefore, when Lord Brahma was pleased and appeared before him, he asked Lord Brahma to be immortal, that is, to never die. But Lord Brahma told Mahishasura that everything that is to be born on this planet must die. It is a universal law. You cannot escape your death. Mahishasura thought for a while, then he said to Lord Brahman, My lord, if I must die, it should be in the hands of a woman.

The Boon of Lord Brahma

The lord Brahma agreed and granted him the boon, or Vardan. The mahishasura came back, and he thought, how can a woman kill a man? It is impossible. I will never die. I am the most powerful person in this whole universe.

The Mahishasura immediately ordered his army to attack humans on earth. Mahishasura created havoc in Devlok. When all the gods became upset, they asked the god Indra to do something to save the universe. The king of Devas, Indras, went to the Trimurtis, Brahma, Vishnu, and Shiva, and explained what was going on on the earth. All the devtas are in trouble because of Mahishasura.

Therefore, on hearing all this situation, the three gods created a powerful woman. A mighty and powerful goddess appeared from Lord Shankar’s trident, or Trishul, Lord Indra’s Prajayada, and Maha Vishnu’s Sudarshan Chakra. The powerful Goddess is armed with inner strength and wisdom. The lion was the ride of the goddess so that she could put an end to Mahishasura.

When Mahishasura heard the rumble of the arrival of Goddess Durga, he asked the woman, “You are trying to attack me?—will be awful.” Durga replied, “I am not an ordinary lady. The goddess told him this, but he was not aware of the powers of the goddess. She did battle for 10 days and killed Surah after a long battle.

Nine Different Avatars of Devi Durga and their Significance

Day one is dedicated to Shailputri. The goddess Shailputri is honored on the first day of Navratri. Shailputri, which means the daughter of the mountains, is made up of the two terms Shaila (mountains) and Putri (daughter). Goddess Shailputri is shown sitting on top of the bull and holding a trident in one hand and a lotus in the other. Shailputri is regarded as the “root chakra” Devi. In the Muladhara Chakra, she resides. Therefore, Mata Shailputri’s worship assists followers in realizing the “Muladhara” shakti that resides inside them.

Day Two is dedicated to BrahmaCharini. She was born in Himavant as the daughter of Daksh Prajapati. This is Parvati’s unmarried appearance from the time she was in penance for Lord Shiva. She received Lord Brahma’s blessing after such a difficult battle and later married Shiva.

This shape represents dedication and confidence. She is worshipped for getting life’s joys. She gives people the courage to face life’s challenges.

The goddess Chandraghanta is always worshipped on the third day of Navratri. Chandra, which means moon, and Ghanta, which means bell, are the two words that make up her name. Her name was given to her by the bell-shaped half-moon that was placed on her forehead. She is also referred to as Chandrakhanda, the Goddess.

The worshipers of the Goddess Durga are thought to gain courage and power from her third roop, which is also said to take away all suffering and issues. The Goddess Chandraghanta is the more amazing aspect of Goddess Parvati, she has a calm nature and beautiful roop. The worshipers experience courage and strength as a result of their devotion to Goddess Chandra Ghanta.

The fourth day of Navratri is dedicated to the goddess, who is worshipped as Mata Kushmanda. The universe was birthed by the goddess Kushmanda’s quiet, gentle laughter, hence her given name. Darkness permeated the world before creation, and this goddess used her divine power to create the universe.

She holds a kamandal, a bow, an arrow, a lotus, a nectar-filled urn, and a chakra in each of his seven hands. She is also referred to as Ashtabhuja Devi since she has eight hands. Her Jap Mala is believed to possess the full capacity for siddhis. It is said that she only revealed a small piece of her smile to create the entire cosmos, known as Brahmanda in Sanskrit. She also likes Mata Kushmanda, a white pumpkin from Bali. Because of her links with Brahmanda and Kushmanda, Mata Kushmanda is her common name.

On the fifth day of Navratri, Skandmata is worshiped. The purpose of the Goddess’s devotion to Skandmata is explained in this tale. The fifth representation of Goddess Durga is Maa Skandmata. Skanda and Mata are the two words that make up the word Skandmata. Skanda denotes Kartike, who is the son of Devi Parvati and Lord Shiva.

Parvati Mata takes the shape of Skandmata. Goddess Durga has four arms in the form of Skandmata. She is blessing the devotees with her fourth hand while holding Kartike in her first, second, and third hands, respectively. Mata is riding a lion and sits in the Padmasana position, which is another name for the lotus.

On the seventh day of Navratri, people worship the goddess Kalratri. All barriers disappear when Maa Kalratri is worshiped. With this aspect of Devi Shakti, one gets power from life’s difficulties. The Goddess Kalratri battles evil and demons. Stay away from stress, fear, evil powers, etc. Although Maa Kalratri is named Devi Kalratri and has the color Krishna, her hair is dispersed and a mala of demon hair is wrapped around her neck. Maa Kalratri has three eyes that are as big as the universe, from which rays continue to flash out like lightning while the mother is mounted on a donkey. She has four arms. With her lower right hand, she makes the brave gesture of Abhayamudra while blessing her followers with her right hand. In addition to an iron cut or katar in his lower left hand, he is holding a blade in his left hand.

The eighth day of Navratri, Ashtami, is regarded as the most fortunate day. Also celebrated on this day is Maa Mahagauri. On this day, unique ceremonies are carried out in Mahaguari’s honor. People fast all day and offer the goddess prayers for prosperity and peace.

Aarti is offered to the Goddess Mahagauri at temples on Ashtami night, and diyas, or little lamps, are used to decorate homes. On this day, devotees adore Mahagauri and present her with sweets. Devotees are said to be released from all their negative energy and to experience peace, prosperity, and good health after engaging in these rites.

The Navratri festival symbolizes the Goddess Durga or Amba. The Navratri festival is considered to be the most auspicious and unique period for the conception of Maa Durga, devotion, and the power of the divine. This form of worship has been going on since historical times. During the festival of Navratri, huge fairs are held on the Shakti Peethas and Siddha Peeths of the Goddess.

All the Shakti Peethas of the Devi Maa have different importance, but the form of the Devi shakti is the same. Also, According to folk beliefs, people believe that fasting on the day of Navratri pleases the mother.

How Navratri is Celebrated

Celebrations in different regions of India

In the east of India, the festival is celebrated as Durga Puja, while in the north, Ram Lila, a visual recital of the Ramayana, takes place, and the nine days end with Dusshera, during which effigies of Ravana are burned to represent the victory of good or evil. In the state of Gujarat, people play Garba, which is a folk dance where people of different backgrounds and skills join together to form concentric circles.

This wonderful festival is celebrated with great enthusiasm, fervor, and enthusiasm even among Bengalis. In the east of India, the festival is celebrated as Durga Puja, while in the north, Ram Lila, a visual recital of the Ramayana, takes place, and the nine days end with Dusshera, during which effigies of Ravana are burned to represent the victory of good or evil. In the state of Gujarat, people play Garba, which is a folk dance where people of different backgrounds and skills join together to form concentric circles.

Durga Pooja is one of the important festivals in West Bengals. In the states of Karnataka and Tamil Nadu, people decorate a part of their home with our dolls called Gombe, which is also similar to golu dolls. In the Telangana state, people celebrate Patakama. It is a beautiful stack of flowers arranged in seven concentric layers in the shape of a temple, most of them with medicinal values. Families and friends come together to celebrate Navratri. Also, According to their traditions, many people do fasting and make kachoris, Sabudana Khichdi and Samak ki Kheer and offer prayers to the mother goddess.

Also, In the end, the ninth day of Navratri is known as Mahapujan, on which nine girls are worshiped. Therefore, these nine girls are considered nine forms of Goddess Durga. In order to welcome and honor the girls, their feet are washed and they are offered halwa and chole that are made in their home. Although according to the custom of some houses, Kanya Puja is also done on the day of Ashtami.

The Goddess Durga means power, energy, and empowerment. She represents the female energy of the universe. Therefore, Durga Pooja is the best holy festival for Hindus. Also, We should celebrate it with great joy and happiness. It is the festival of good over evil. These nine days teach us so many things.