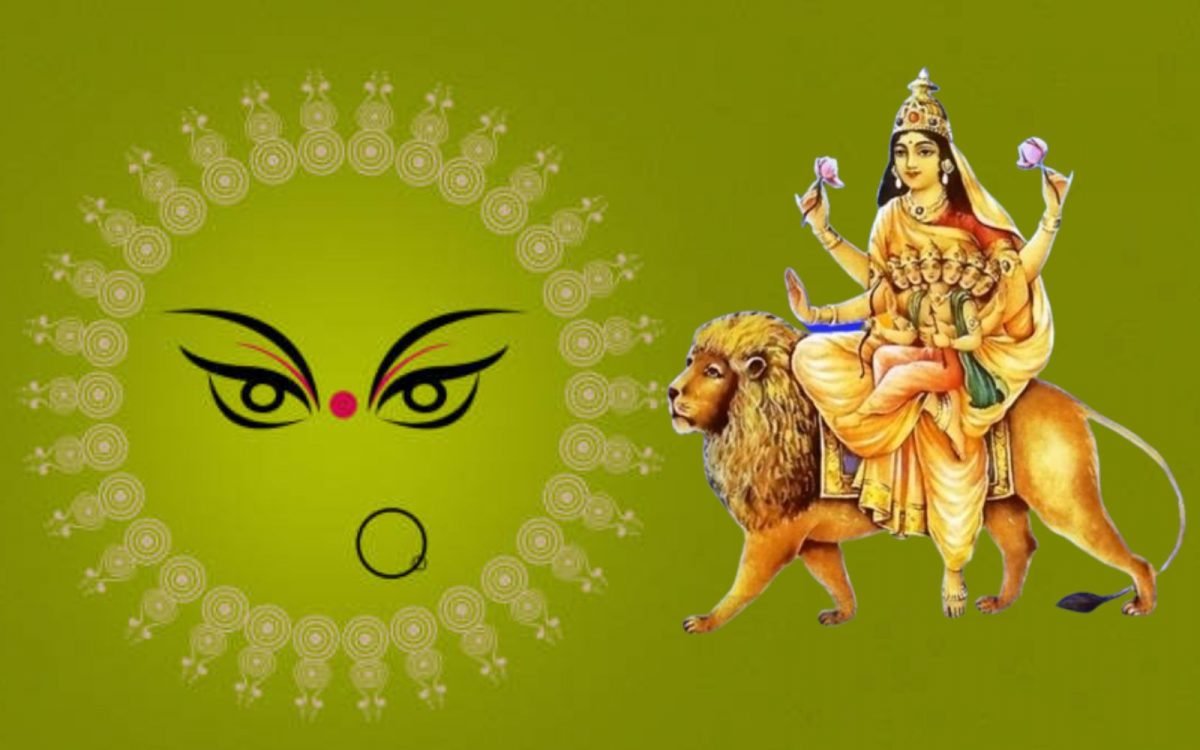 Skandmata is a form of Parvati Mata. Goddess Durga has four arms in the form of Skandmata. She is holding Kartike in one hand and in the second and third hand she is holding a lotus and with the fourth hand, she blesses the devotees. Mata’s ride is a lion and she is seated on a lotus, which is also called Padmasana.

Devi Maa is the goddess of the Vishuddha Chakra. This chakra is located just below our protruding part. Worshiping Devi Skand Mata awakens this chakra, due to which the person gets the victory of speech, and his life increases.

Story of Devi Parvatii as Skandmata

There is a very interesting story of Skanda Mata:

After Sati burnt herself in the Yagya, Lord Shiva got separated from worldly matters and got absorbed in Tapasya. At the same time, all the gods were suffering due to the power of Tadakasur. Tadkasur had a boon or Vardan that only the child of Lord Shiva could kill him. After that Maharishi Narada goes to Mata Parvati and after doing this, Tapasya asks her to marry Lord Shiva so that the child born to her can kill Tadakasur. Goddess Parvati continued to do penance or Tapasya for Lord Shiva for thousands of years, but Lord Shiva did not pay attention to her penance.

Marmad(Kamdev) Used his power to attract Shiva toward Devi Parvati

On the other hand, Tarakasura was becoming more and more powerful, so the gods requested Marmad to use their power to attract them toward Parvati. And Marmad used his powers to meditate on the Shiva. Lord Shiva was distracted and became very angry and immediately opened his third eye and burnt Marmad to ashes. When Lord Shiva became calm, he saw that Parvati was doing penance for him. So Lord Shiva became more attracted to him.

In course of time, this seed became a divine child who was the son of Lord Shiva and Parvati. Because that son was taken care of by 6 sisters (Kritika), his name was Kartika. Kartike is also known as Skanda. And his mother Parvati is known as Skandmata. Tadkasur had a boon or Vardan that only the child of Shiva could kill him. So Tadakasur was killed by Kartike during a war.

Devi Skandamata has a great contribution to the death of Tadakasur because she gave birth to Skanda. Goddess Skandamata is considered to be the goddess of wisdom and sympathy. Goddess Skandmata is worshiped for getting children.

Whoever worships Skandmata with a true heart, the Goddess Maa definitely fulfills his or her wish. The worship of Skandmata is also done like the rest of the days of Navratri. Many women also worship Skandmata for getting a child.

Top Temples to visit in Navratri

Poonam Sharma is a seasoned Digital Marketing Specialist and Content Editor at Healthy Life Human where she educates millions of users about health, lifestyle, technology, culture, food, and beverages. For more, Connect on LinkedIn.
PrevPreviousBest Power Waxer for your Vehicle
NextDiwali Celebration in Leicester, EnglandNext