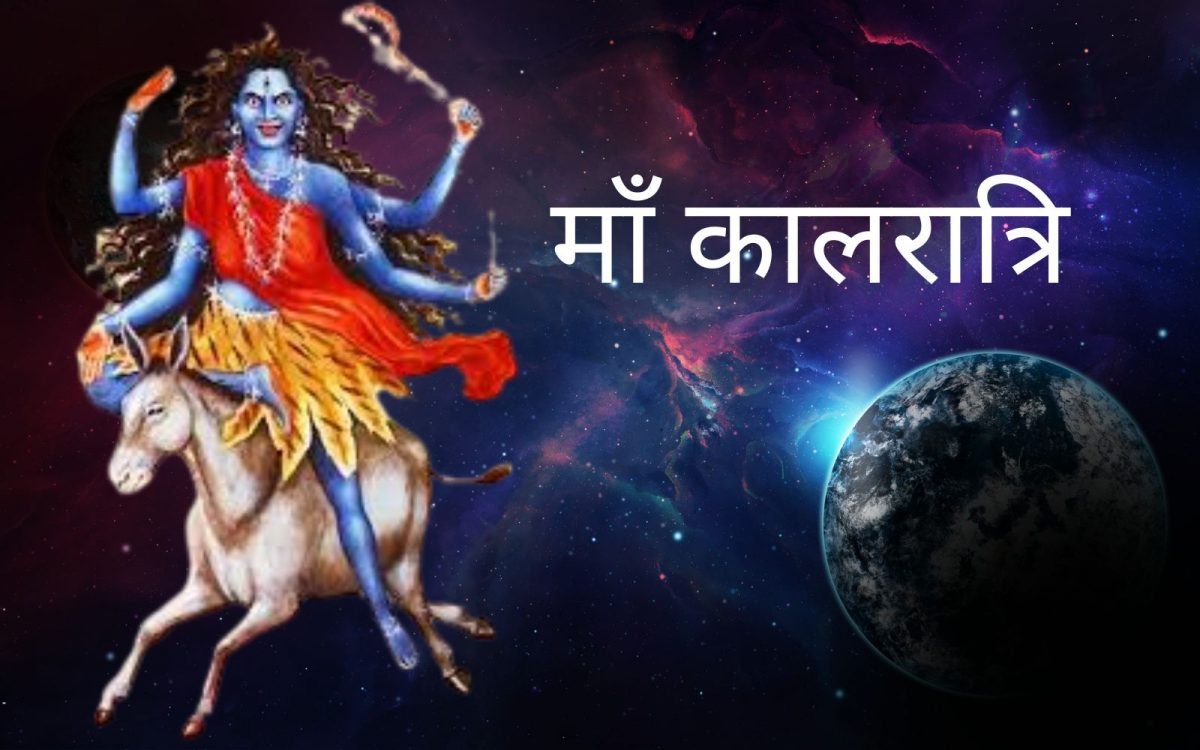 Goddess Kalratri is worshiped on the seventh day of Navratri. Worshiping Maa Kalratri removes all obstacles. With this form of Devi Shakti, one is protected from the troubles that come in life. Goddess Kalratri fights demons and evil. Stress, fear, evil forces, etc. stay away.

Although The color of Maa Kalratri is Krishna, that’s why her name is Devi Kalratri, her hair is scattered and there is a mala of demons’ hairs around her neck. The three eyes of Maa Kalratri are as vast as the universe, from which rays keep emanating like lightning and the mother rides a donkey. Devi Kalratri has four arms, in the right hand the mother goddess blesses her devotees, and in the lower right hand, the mother gives a fearless expression in Abhayamudra. She has a blade in his left hand and an iron cut or katar in his lower left hand.

Goddess Shakti is worshiped as Kalratri on the seventh day of Navratri. This story is the story of Goddess Kalratri.

Chand, Mund and Raktabeej are three demons attack on all three lokas

A long time ago, there were two demons named Shumbh and Nishumbh. He had a brother named Namoch, who was killed by Indra, the king of the gods. Shumbha and Nishumbha were very angry with this. They decided to attack the gods to take revenge or pay back. On the other hand, There were three demons named Chand, Munda, and Raktabija who were friends of Mahishasura who killed by Devi Durga. He came and joined hands with Shumbha and Nishumbha. The army of all these demons had attacked all the gods, defeated them, and started ruling over the three worlds. All the divinities or devtas became troubled and worried and approached to seek help from Goddess Shakti.

Hearing the words of the divinities or devtas, Mother Goddess took the form of a goddess named Koshiki, who is the same image as Devi Parvati. Koshiki invites Shumbha to fight. An army of demons ruled by Shumbha reached to fight with Goddess Koshiki. The angry eyes of Goddess Koshiki were enough to kill some monsters, but some other demons were very powerful such as the demons named Chand, Munda, and Ruru.

If Goddess Kalratri was not there then it would have been very difficult for the demons to die. This is a fearless and violent form of Goddess Shakti, but we should not panic with this form. Maa Kali fulfills the wishes of her devotees. Kali or Kalratri also has the form of Goddess Shubhankari which means one who purifies life. Goddess Shakti is worshiped as Kalratri on the seventh day of Navratri.

If the worship of Kalratri is done with pure mind and emotion, then the devotee can achieve the desired achievement. Mother Goddess is worshiped like the rest of the days of Navratri. For getting more fruits you can do these vidhis of devi kalratri.

Devi Kaalratri gives knowledge on how devotees should use their anger to achieve success. Mother Goddess always gives good fruits to her devotees. Therefore, the Goddess Kalratri is the goddess of yantra, tantra, and mantra. Ghost demons run away by taking only the name of Goddess Kalratri.

Poonam Sharma is a seasoned Digital Marketing Specialist and Content Editor at Healthy Life Human where she educates millions of users about health, lifestyle, technology, culture, food, and beverages. For more, Connect on LinkedIn.
PrevPreviousHow to make a boy fall in love with you very fast
NextGolden Temple: History, Foundation, and SignificanceNext