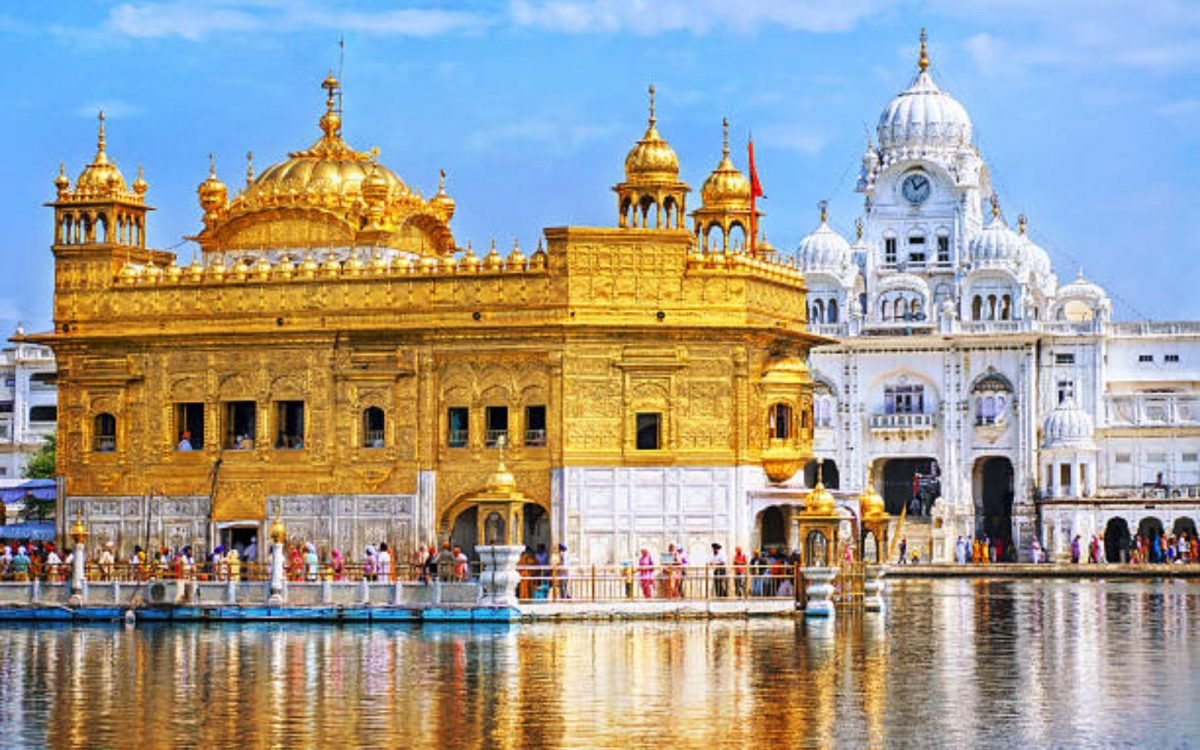 Shri Mandir Sahib is also known as Darbar Sahib or Golden Temple. It is the holy place or the most important place for the followers of Sikhism. It is located in the city of Amritsar in the Indian state of Punjab and is the biggest attraction here. The entire Amritsar city is situated around the Golden Temple. Thousands of devotees and tourists visit the Golden Temple every day. The Golden Temple of India is the center of tourists not only for Sikhs but all over the country and abroad also. This golden temple is a place of pilgrimage for Sikhs from all over the world.

Amritsar is named after the lake or Amrit Sarovar which was built by the fourth Guru of Sikhism, Ramdas Ji himself. This Gurudwara is situated in the middle of this lake. The outer part of this Gurudwara is made of gold, hence it is also known as Golden Temple.

According to a popular folk tale, both the sons of Lord Rama, Luv, and Kush had come near this lake for learning and Ramayana lessons. It is said that this lake is so holy that many diseases get away from it.

There is a big History of the Great Golden Temple. It includes the foundation of Swarn Mandir, Guru Granth Path, and the four doors meaning. Read Below to get information about this Wonderful Pilgrim Place of Sikhism.

The story of the establishment of Amritsar begins in 1574 AD. When Guru Ramdas Ji had camped on the bank of an old lake or Sarovar, then it started getting crowded. Later Guru Saheb bought the lake and the land around it. There the Guru’s residence was named Guru Ka Mahal and the settlement or Basti was settled at Ramdas Pura. The name of the accommodation situated near this huge lake made of Amrit Tuli water was named Amritsar.

Guru Ramdas Ji planned to establish a huge religious center by building a temple near this settlement, but he died only after 2 years. Later his son Guru Arjun Dev Ji completed the construction of the temple. Although it is a Gurudwara of Sikhs, the addition of the word temple in its name makes it clear that all religions are considered equal in India. Even a Muslim had the foundation of Hari mandir Sahib or Golden Temple. The fifth Guru of Sikhs, Arjun Dev Ji laid the foundation of the Gurudwara in December 1577 from Sai Miya Mir, a Sufi saint from Lahore. The construction of Shri Hari Mandir Sahib started in 1581 and was completed in 1604 it becomes one of the most attractive pilgrim places for tourists.

About 400 years old, the map of this Gurudwara was started by Guru Arjun Devji himself. This Gurudwara is a unique example of beauty. Its carving and external beauty are made on sight. There are four more doors of the Gurudwara which open in all four directions, East, West, North, and South. There is a 60-miter bridge to reach here. It has four gates in all four directions, which is a symbol of the fact that devotees coming from any direction are welcome in the Guru dwara.
Even at that time, the society was also divided into four castes and people of many castes were not allowed to go to many temples. Still, the four doors of this gurudwara invite people of those four castes to come here. The four gates built in Hari Mandir Sahib represent the thinking of Sikhs towards other religions, those four doors mean that – any person of any religion can come to this temple.

There is a recitation of Guru Granth Sahib that starts from 3 am to 10 at the night. At the end of the lesson at ten o’clock at the night, the Guru Granth Sahib is honored by taking it to a place called Kutha Sahib, after which it is cleaned with milk. The next day at 3 a.m. the lesson starts again. After this, devotees come to bow their heads throughout the day.
The Golden Temple has been destroyed many times but because of devotion, and faith, Sikho rebuilt it. It was rebuilt again in the 17th century. Every time it was destroyed and every time it was rebuilt, every incident in the temple is shown through a picture. It was destroyed in the 19th century by the Afghan attackers, then Maharaj Ranjit Singh rebuilt it and decorated it with gold lining. After plating gold, the fame of this temple looks too good. Near the lake, there is a tree named Dukhbhanjan Biri standing for centuries. One finds himself pure by bathing in the lake. For Instance, On the birthdays of Gurus or other festivals, the temple is decorated with lights and devotees come in large numbers at that time. After darshan, people take Charanamrit on the green Pedi.
It is believed that the wishes of the person are fulfilled. Next to the Golden Temple is another marble building. It was founded by the sixth guru of the Gurus, Hargobind Ji. This is the highest throne(Singhasan) in the Sikh building. It is a historical heritage.

Every day lakhs of people come for devotional worship and take the main prasad of this langar. Guru ka Langar is a special attraction of Golden Temple, here everyone gets food during the meal. Here everyone does langar sitting in a row. However, In the langar, people do the work of making and distributing pulses, rice, vegetables, and chapatis among the devotees for free and with confidence. This type of service is called Karseva, it has special significance in Sikhism.

Apart from langar, many devotees who have a lot of faith in Sikhism come from here. In addition, there is a complete arrangement for food and drink for the devotees coming here and the langar is open 24 hours. Not only food, here Shri Guru Sarai has made arrangements for accommodation for the people of Gurudwara. This was built in 1784. It has 228 rooms and 18 large halls, in addition, mattresses and sheets are available to spend the night.

The people who come here take full care of cleanliness. In other words, It is not allowed to come into the temple by wearing shoes or sleepers or with the head open. Similarly, Smoking is prohibited in the entire temple. There is a requirement to keep the gathered items etc. at every gate. There is a system of running water at every entrance, no one can enter without washing their feet.

Shri Mandir Saheb, Guru Darbar, or Golden Temple is a heritage. Due to their huge faith, and belief lots of tourists come here and take the blessings of Guru Granth Saheb. This Golden Temple welcomes not only Sikh people but other devotees who belong to any religion. Therefore, you should definitely go to this pilgrim place.