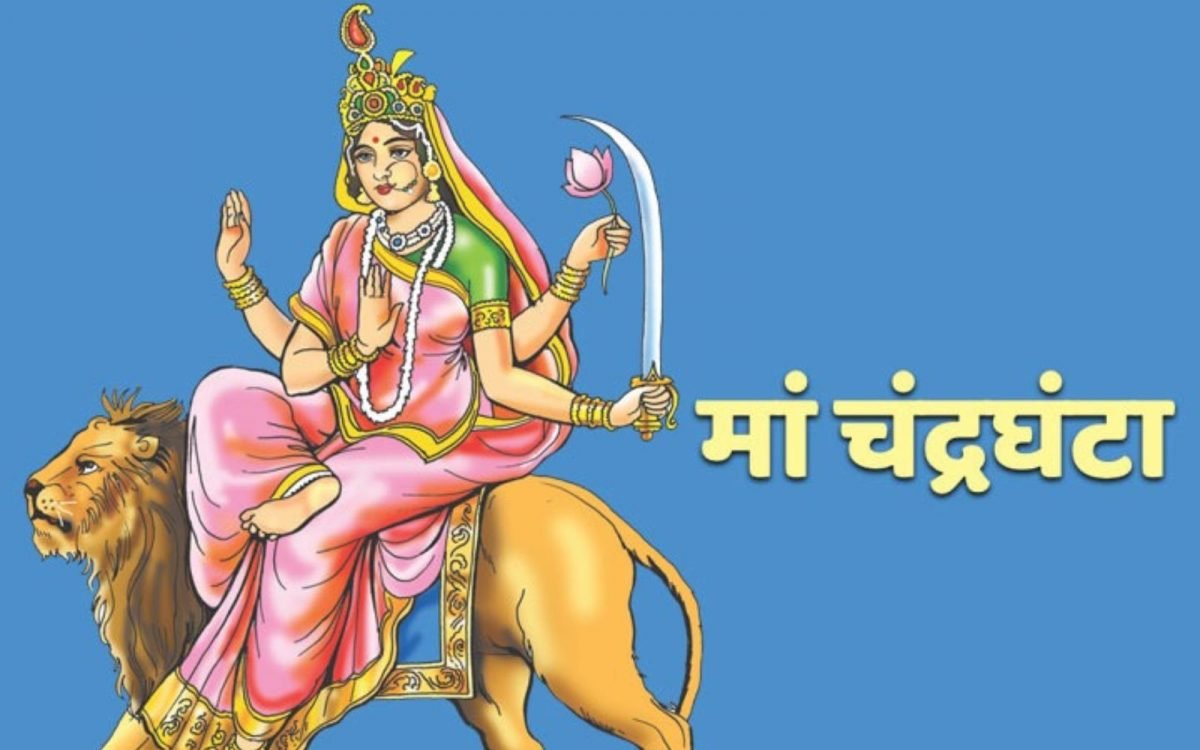 Navratri brings happiness and joy with itself just like the Indian festival. People clean the houses before two days of Navratri.

When people worship Mata ChandraGhanta, they generally overcome their fears and experience an increase in their sense of strength. She is the extreme version of Goddess Parvati, with ten arms and multiple weapons. She is always ready to enter the battlefield while riding the lion. Tantra Sadhna states that this form of Goddess ChandraGhanta awakens the Manipur Chakra. Goddess ChandraGhanta is always ready to eliminate evil on the planet. Those who worship ChandraGhanta Maa can remove the flaws of the planet Mars from their Kundli. This is why, on the third day of Navratri, one should always worship Goddess ChandraGhanta.
Worshiping the Goddess properly leads to the destruction of a person’s sin. Couples enjoy a happy married life full of comfort, luxury, and prosperity with the blessings of Goddess Chandra Ghanta. Couples who worship her can easily find solutions to a variety of problems they face in their marriage. She is associated with the planet Venus. Worshiping goddess Chandra Ghanta can help if Venus is affecting your kundali in any way.

1- Before sunrise, take a bath and wear clean clothes. The place where you keep the Goddess’s statue must be cleaned with holy Ganges water.

2- The statue and Kalash will be placed on the cleaned area next. Clothes, Chandan, sindoor, turmeric, jewelry, roli, durva, flowers, perfumed agarbatti, Diya, fruits, and paan are all required for the puja to be presented to the Goddess.

3. Then you have to repeat the mantra

Offer the flowers to the goddess while repeating this mantra

4- Chant the Durga Saptashati mantra and listen to her story. Perform the Goddess’ aarti with a Diya.

5- On this day, offer milk sweets to Goddess ChandraGhanta, along with apples and jaggery.

Each Goddess is presented with a unique type of offering. The offering is said to represent your devotion to the Goddess. Moreover, goddess ChandraGhanta should always be represented with milk-based sweets. After you’ve offered it to the Goddess, eat it and share it with others. It is believed that making this offering to the Goddess will end all of your pain and problems.

The third day of Navratri is extremely important. On this auspicious day, it is believed that the Goddess Chandraghanta is worshipped. The sound of the Goddess’ bell scares away darkness, monsters, and demons. Worshippers commonly have the possibility to visualize supernatural goods with the Goddess’s blessings. Worshiping Goddess ChandraGhanta, according to Hindu Shastras, evokes the power of fearlessness and courage, resulting in calmness and politeness in the end.

Deepak Kumar is a professional Digital Marketer and business consultant to many startups. He loves to dig deep about business strategies, technology, fitness, automobiles, food, and travel. He is district level athlete as well. Connect with him on Linkedin for more.
PrevPreviousHow to convince your boyfriend after a breakup
NextSixth Day of Navratri 2022: माँ कात्यायनीNext