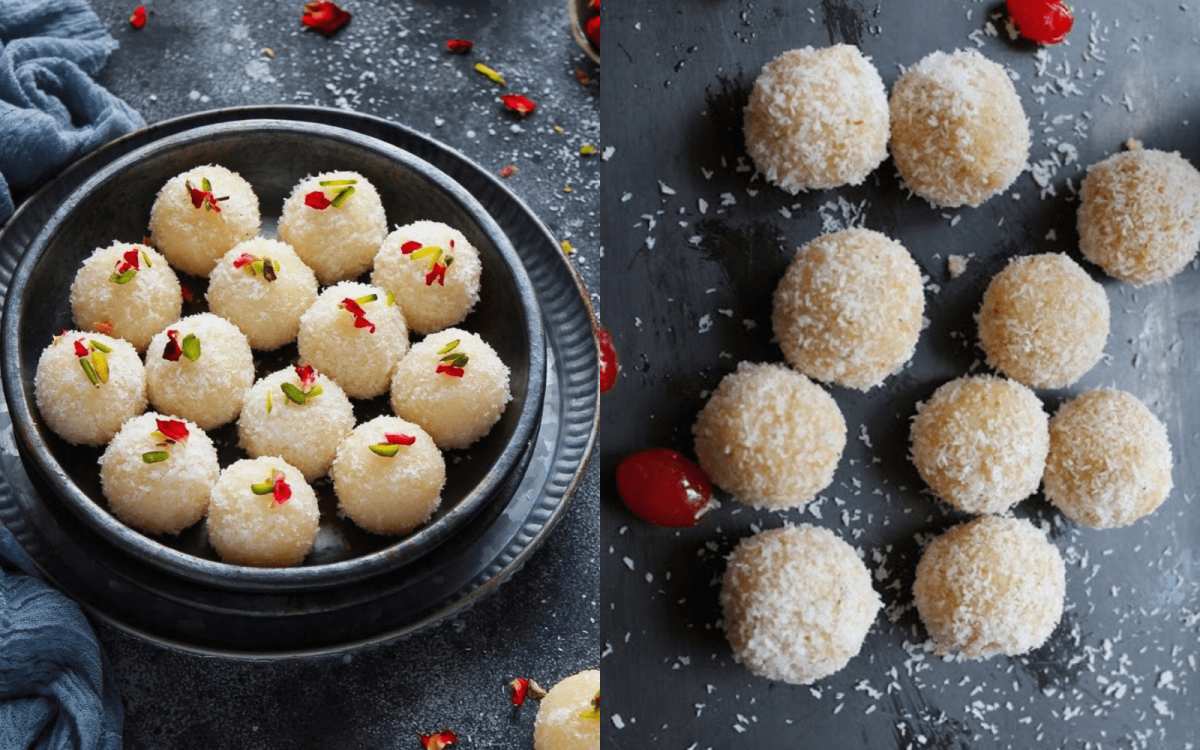 There is no denying that coconut ladoo is one of the most popular sweets in India. The delicate yet delicious flavor of this sweet is hard to resist. And what makes coconut ladoo even more irresistible is that it is made with just a few simple ingredients. So, whether you are searching for a Diwali party or looking for something different to serve to your guest, this delicious option will surely impress them.

Coconut ladoo is a traditional sweet ball made mostly of coconut and a sweetener such as sugar or jaggery. They have a light cardamom odour to them. For added crunch, various types of nuts and raisins are sometimes added. Many versions include ghee and milk to add richness. Nariyal laddu is another name for coconut ladoo.

Coconut ladoo was traditionally made with fresh coconut, jaggery, and cardamom powder. Jaggery has been consumed in India for thousands of years due to its unrefined and pure nature. During Hindu festivals like Ganesh Chaturthi, Hartalika Teej, Diwali, Shivratri, etc, coconut ladoos are offered to the Gods/Deities, and many people still do not use sugar when making foods for the offering.

Over the years, ambitious cooks have experimented with using sugar, milk, and mawa to add richness to this decadent and delicious coconut ladoo.

For example, Nestle has taught us how to make instant coconut ladoos with their milkmaid / condensed milk over the last decade.

The age-old tradition of breaking a coconut to make coconut ladoos has changed to store-bought fresh/frozen and dehydrated coconut. So you can make these coconut ladoos with pretty much anything you have on hand.

This recipe requires fresh, frozen, or dry coconut. The use of Nuts is optional. However, in this recipe, toasted unsalted pistachios work well.

To toast 8 to 10 cashews or pistachios in a heavy bottom pan until crunchy, if using. Place them on a board. Pour in half a cup + 2 tablespoons sweetened condensed milk.

Next, add 1/2 cup dry or fresh coconut. If it isn’t fine, put it through a grinder or food processor. Then add it to condensed milk.

Combine the two thoroughly. Taste it to see if the sweetness is appropriate. If you want the Coconut Ladoo to be sweeter, add extra condensed milk. Then start cooking it on low flame.

Stir the mixture constantly, until the entire mixture becomes a mass. It must still be humid. Overcooking the mixture will result in hard ladoos, and there is no turning back. Then remove from the heat and sprinkle in 1/4 teaspoon cardamom powder or 1 teaspoon vanilla extract, as well as 2 tablespoons chopped pistachios or other nuts. Cool a small portion before tasting it. It must not be chewy.

While the mixture is still warm, scoop small amounts into your palm and gently press down to form balls.

Make sure your ladoos are still moist before garnishing. Roll the coconut ladoos in 2 to 3 tablespoons of coconut.

Refrigerate the coconut laddu after storing it in an airtight container.

Choosing coconut: However, you can also use fresh, dry, or frozen coconut. Make sure the frozen coconut is raw rather than cooked and frozen. If you would rather use frozen coconut. Use the tiny shreds of dry coconut if using it. For a fine texture, put in a grinder or process in a processor.

Sweetener: The balls can be sweetened with sugar, jaggery, palm jaggery, or condensed milk. The tastiest and most flavorful coconut ladoos are those cooked with jaggery. If your jaggery contains debris, you must dissolve it first before using it.

Flavoring: The coconut ladoos are traditionally flavored with cardamom. However, some people also use grated nuts and dried ginger powder during the winter. Vanilla extract also works well with the ladoos.

Vegan: Simply swap out the milk in the recipe with coconut milk or make them with jaggery to make a vegan alternative. Since jaggery contains a lot more moisture than sugar, the recipe can be made without milk.

Quantity of milk: When using fresh coconut, the amount of milk can be reduced by half. You can alternatively simmer 2 cups of milk until it is reduced to 1 cup for a deeper flavor. Then immediately add the sugar and coconut to it. This needs a little more time.

Coconut ladoo is a dessert that can be enjoyed by anyone. It is a sweet and refreshing way to end a meal. It is also a healthy dessert that can be enjoyed by everyone. Coconut ladoo is a popular dessert in India and other parts of the world. It can be enjoyed by anyone whether they are on a diet or not because it is gluten-free and low in fat and calories. Coconut Ladoo is made with simple ingredients such as coconut, sugar, and nuts which makes it easy to make at home. It can also be made in advance and stored in the fridge for a few days which makes it convenient for everyone to enjoy it.

Coconut ladoo is delicious as it is but it can be enhanced by adding other ingredients to it for an added flavor. Different spices can be added to the ladoo to add flavor and make it more aromatic. For example, cardamom can be added which adds a delicate aroma to the dish.

Deepak Kumar is a professional Digital Marketer and business consultant to many startups. He loves to dig deep about business strategies, technology, fitness, automobiles, food, and travel. He is district level athlete as well. Connect with him on Linkedin for more.
PrevPreviousBest Rye Whiskey
NextRice Kheer Recipe and TipsNext