Champaran Meat: Everything You Know About This Cuisine 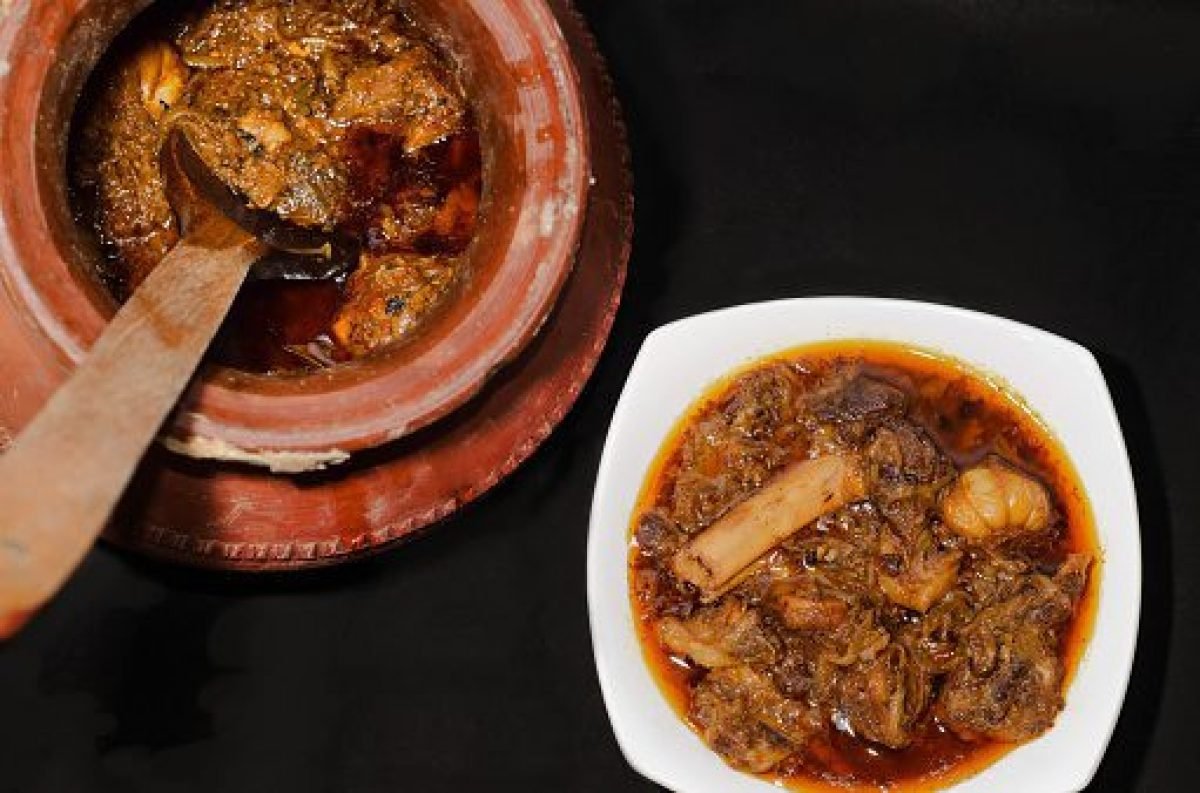 If we’re talking about non-vegetarian foods in Bihar, The first thing that comes to mind is Ahuna meat, also known as Champaran meat in other parts of the country. In this blog, we will know Why Champaran meat is so tasty and famous?

Let us explain to you the story of this meat delicacy cooked in clay pots on today’s tour.

This one-pot pork meal is thought to have originated in Ghorasaran, a village near the Indo-Nepal border. It then made its way to Bihar’s Champaran region, where the preparation procedure took on a new dimension.

Since then, the popularity of this meal has expanded throughout the country.

Let’s start with Patna’s Old Champaran Meat House in pursuit of the recipe and its flavors.

First, we’ll prepare some onions in accordance with the gravy then some smashed garlic, and after that, two garlic pods, and chilies (green).

We’ll use green chilies instead of red because red chilies upset our stomachs.

Then we’ll take some salt according to personal preference then there’s the masala. In a half kilogram of mutton, how much masala is there? We put five tablespoons in one kilogram.

So we’ll need two and a half tablespoons for this. Now we’ll add the oil. Mustard oil is a seed oil that is extracted from mustard seeds. Obviously, It’s been smoked already. The spiciness has been lessened by heating the seat.

Then we’ll go get the mutton and all of these will now be combined.

It has a lot of pores, as you can see. As a result, if we add the mutton directly, the water from the mutton will leak. As a result, mustard oil is used. Put it in there, by moving it, we are able to line all of the pores.

We’ll now put these into it.

We’re going to put the meat in the handi now. It’s intended to be used as a rice cooker. We’ll set it on this, and as the pressure inside it builds up, it’ll be released from here.

What does the word Ahuna mean?

The word Ahuna comes from the Bhojpuri language. Ahuna is the name for a clay pot.

When the first potato crop is harvested, villagers perform a ritual called Ahuna, in which they take the first production of the season, combine it with field residue, and smoke it.

In Bhojpuri, this technique is called Ahuna.

Ahuna is the name of the handi.

The handi mutton is now ready to be prepared into Ahuna mutton in the Old Champaran home manner.

So, let’s put it to the test. It can be used with any type of burner or flame. You can make it using a gas stove or a heater and can also prepare it in pits with dried leaves if you’ve gone to a picnic place. You may cook it on any flame by regulating the flame.

How long do you think it’ll take to cook on this?

It is dependent on the goat’s size.

We used a 7-kilogram goat for this purpose. So, for a 7 kg goat, 1 hour of cooking time is required.

Another deception is that we deduce it from the vapors.

And we’ve gotten so used to producing it that we can tell whether it’s done or not just by holding it.

After ten minutes, a cloud of vapor has formed and air will escape. The top of the structure has cracked open. It is obvious that it is loaded with gases. It has also started to release the lid has been slammed shut. We will not abandon it, even if it pushes towards the summit.

And we’re going to mix everything up like this.

You may perform it 5 to 6 times in 45 minutes to an hour. If you shake it a few more times, the mutton will not be disturbed. It also appears to be getting chilly air from the sides. There is a lot of pressure inside. This will add to the earthiness. You’d be surprised at how flavorful it would be.

So far, 45 minutes have passed.

The finishing touches are being applied to the mutton. Even if certain portions are still raw.

So, it’s time to lock the pressure. It will cover the meat and simmer it until it is done.

Champaran meat has some advantages

Meat consumption has a number of disadvantages.

Sanjeev Chauhan is a content creator for Healthy Life Human. He is a Digital Marketing Expert also likes to share latest information on technology, health, travel, business etc. He is very passionate about providing quality information to the online users. To find out more about Sanjeev, connect to him on LinkedIn
PrevPrevious10 Surprising Health Benefits of Yoga
NextYou Must Have These Fitness Gadgets For Your WorkoutNext