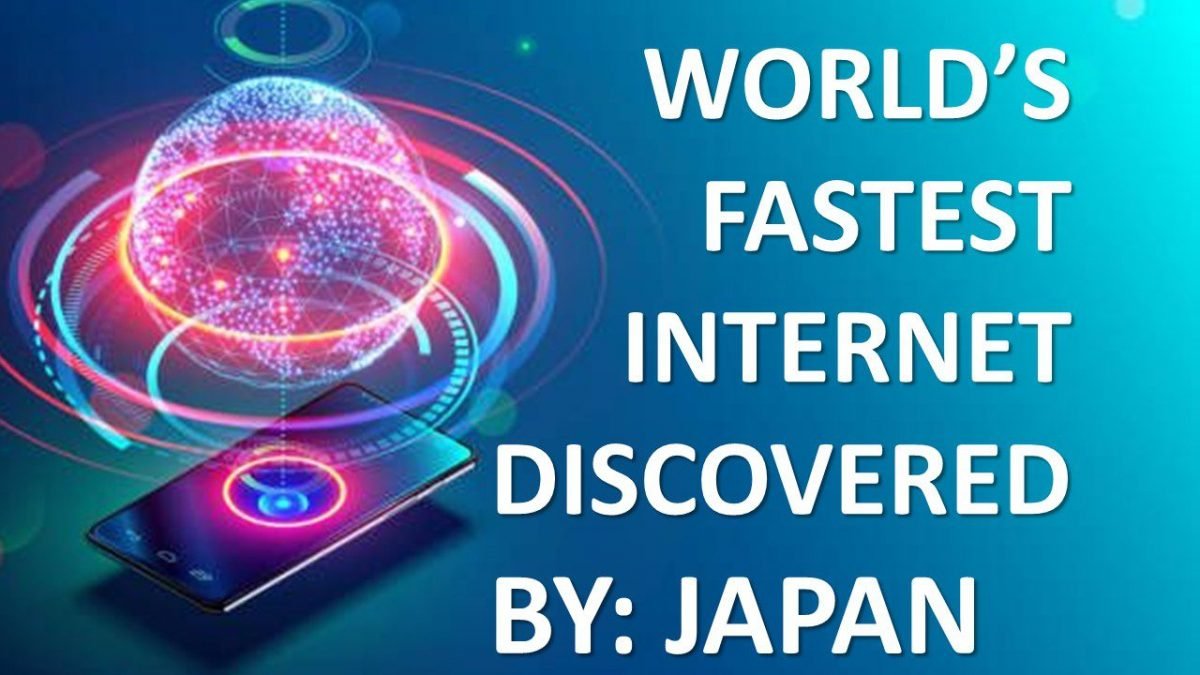 This is how Japan has broken the speed record. The world stood still as Japanese engineers took the chance at breaking the internet speed record. The communications and technology institute successfully achieved a data transfer at an impressive 319 terabits per second. Japan has discovered World’s fastest internet.

The national institute of information and communications technology (NICT) engineers set this record. As a challenge to beat last August’s attempt at internet speed. The achievement has now been published in the International Conference on Optical fiber communication as a research paper. The conference published that the feat of 319 terabits per second (Tb/s) was transferred over some 3000 kilometers. The research paper also gave insights into the process.

Fiber use by Japan

The new technology used four-core Optical Fibre. It’s a standard outer diameter of 0.125mm to transfer the data. The transfer happened over light and not cable. The scientists and engineers used a 552- channels laser that uses various wavelengths this time.

The setup is made from the recirculating transmission. The loop made use of two rare-earth-doped fiber amplifiers. The specialized amplifiers are what gave the range and speed an extra boost on the internet. However, The speed we are talking about. This was 7000 high-definition movies in a second. The engineers recorded this super-fast data transfer without a drop in performance of the internet across the 3000 kilometers distance. World’s fastest internet discovered by Japan has high range high internet speed.

Why did Japan Discover this new fastest internet speed?

Shifting data over such speed is still not available to the ordinary consumer, but if it were, That made the internet untouchable. The main reason is that upgrading to this new format would be very expensive. The kind that the ordinary person could not afford. Data passing cables doubled four times. The experiment upgraded the fiber optic line with four cores over the single-core lines to improve efficiency and travel faster.

The infrastructure is still within the confines of Japan, but the team is looking at expansion across the ocean. The future data transfer speed could get to trans-oceanic distances. The extensions will begin soon as the national level of speed enhancement takes off. The future of communication systems is exciting. The research and its acclaimed success mean that it can finally the bandwidth-hungry world and the services required. The world needs the internet now more than ever. As we have realized the importance of quality high-speed internet.

We need to find more ways it accessible to all. The economies of the world rely on connectivity now. Any part of the world which is not getting high-speed. Internet is racing against the times. Industries like healthcare, commerce, entertainment, and education have all turned their attention to achieving the best out of the internet. If you live in a big city, you would understand the importance of fast internet.

So many people who live in the same city might be sharing the same internet which makes it almost slow. Remember all the times you have gone to a rave and missed your friends due to the crowd but couldn’t get a hold of them because the internet crashed? Well, We do too, so imagine the internet was so fast that you didn’t have to worry about too many people on it at once. With this high speed enjoy Netflix &your favorite youtube channel.

These engineers think you should get the fastest internet ever because fast is not good enough. That is why it is such a big deal whenever there are new strides in the broadband space. The world is always looking at advancement, and countries always want to take the lead in something. It is exciting news. Japan has proven again why they are a  tech giant among its counterparts.

There are university laboratories worldwide that are looking at ways to achieve this all the time. Many pieces of research are going into the speed increment on the internet. And it seems that the Japanese institute has struck gold. It wasn’t long ago when states like Virginia, California, and Connecticut invested In universal broadband for their states.

The internet as we know it today is as necessary infrastructure as roads and railways. The speedier the internet around you, the more business you can do. Investors would be willing to move into your state or country.

Virginia started a $700 million project to connect its rural citizens to 300 mph internet. California has also started working on the bill for the $6 billion connectivity project. So even with the average internet speed. We have it currently. This super-fast internet that connects over light and not cable can reach a lot of people more easily. And this World’s fastest internet gives speed to your work.

What this faster internet will do?

Netflix has about 3,781 movies in its library. The 319 terabits mean that you can download all of them in one second. We still have the speed to download other things. Do you believe the importance of this statement? You can download Every movie on Netflix at once and in less than a second. The sound excites me as much as it should, but there are other important reasons for the experiment.

The engineers developed this high-speed technology for transferring vast amounts of data across long distances. That is looking at more government agencies and departments sharing information with their allies across the board. Since it is 10 million times faster than the home internet that we use, It might come in handy for vital information on national security issues. This is how this World’s fastest internet was discovered by Japan helpful.

The scientists at the base have to wait seven minutes. After sending commands to see that the rover understands and then obeys; with internet speed like this, the space teams can receive instant feedback from their robots and cameras. This high speed and vast data would tremendously increase the mission advances in space tourism and research on Mars.

So, the research focused on tangible things like getting people to space now. But don’t worry, soon the concept of the internet that is 10 million times faster than the one at home will no longer be fascinating. What would you think the new internet speed record will mean to the world’s communication system? If fully developed to run commercially?

Do you think that this new feat puts Japan at the top of the internet game globally? Share your thoughts and opinions in the comments. also, share your views about World’s fastest internet discovery by Japan. I really enjoy hearing from you.

Neha Rajput is a content writer at Healthy Life Human. She has been an active participant in various exhibitions and competitions. She also has been awarded gold medals in the science stream at the national level. Also, she likes to share information on various topics related to health, fitness, business, technology, career etc. to the online users worldwide. You can find her on Linkedin.
PrevPreviousAdani Group partnership with Flipkart
NextCancer Patients Clinical Trial Dostarlimab Miracle DrugNext