Why do flamingos stand on one leg 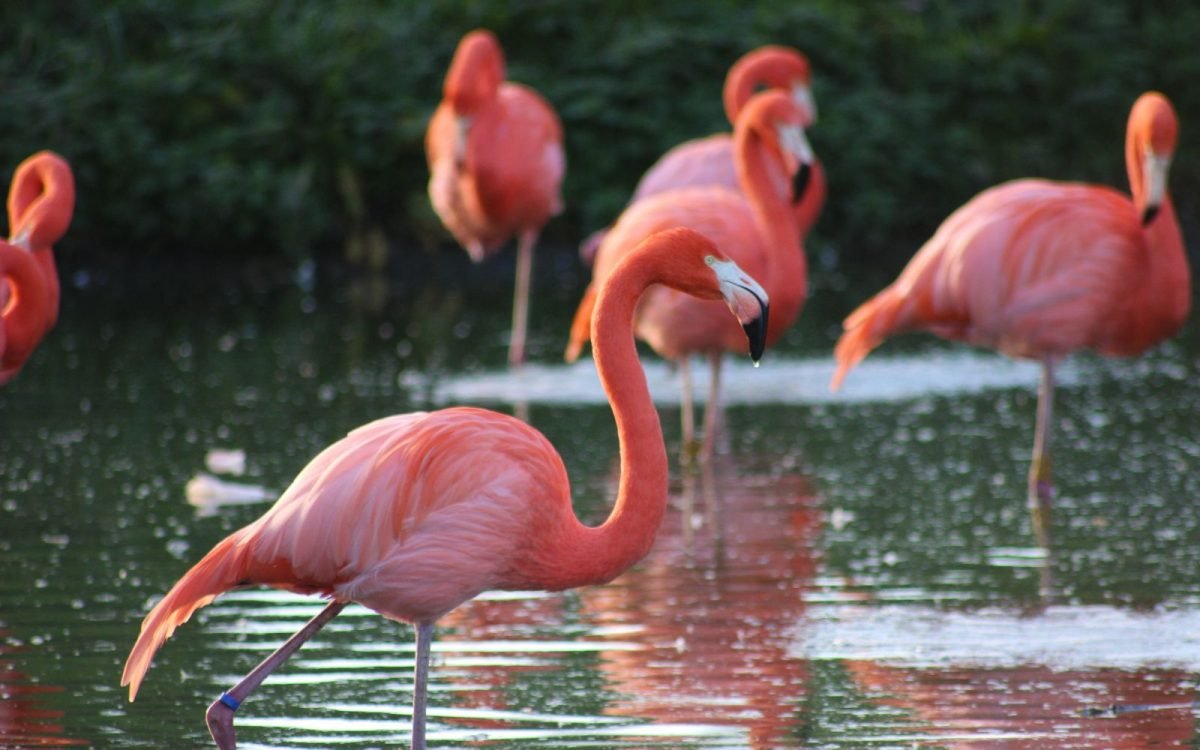 If you ever take a drive to the salt pool near the coast in Africa, parts of Mexico, South America, the middle east, or India. There is a good chance that you will see a group of flamingos playing, bouncing, or standing on one leg with their bright pink feathers that looks pretty good with the landscapes.

It doesn’t take long before you notice the most interesting feature that many of them will be standing on one leg sometimes for hours at a time. Even when they sleep, they sleep on one leg. Isn’t it strange?

For anyone who doesn’t know about flamingos, they are large birds who assemble in large groups around the world. And you can easily recognize them by their hooked bill’s pink salmon color, their extreme habitat preferences, and their cordial nature. They spend almost their time standing in shallow water sources. They don’t prefer fresh water. Flamingos can easily be found in acidic water like salt pools, soda lakes, and high saline lagoons. They are easily adaptive in this water. But on the other hand, if we talk about humans, it will be a kind of torture for them because they will not be able to adapt.

Also, flamingos can drink near boiling fresh water from geysers and springs. And have very little competition from other species nor many predators who would brave those waters. Additionally, Flamingos have tough leathery skin on their legs that protects them from damage in acid-rich waters. The danger is that since flamingos have adapted from the extreme environment and eventually adaption will take time.

Due to the increase in mining and commercial fishing, these changes are affecting the climate due to which the main food is fish for the flamingos is decreasing. And the decrease in this can affect their adaptations because of the changes in the ecosystems. This lack of feeding can affect them badly. So, now you know about flamingos and their adaptations. Now, the answer to why flamingos stand on one leg can be easily understandable.

Researchers from the Georgia Institute of Technology found that the structure of the bones and the joints supporting a flamingo’s legs are slightly contradictory. There is less stability when they use both of their legs. When a flamingo lifts one of its legs, its body weight is able to shift forward and balance perfectly on the locked leg beneath the body. Flamingo joints have a locked resting position that secures them in a place as long as they are standing on one leg.

The study found that it actually requires less effort to stand on one leg than on two. It is the perfect position of them for stability.

When the flamingo is not moving around or changing the feeding location, so this is a good chance for the flamingo to be stable. It is also a smart way to just save your energy like other creatures.

Flamingos can allow half their brain to fall asleep a phenomenon called hemispheric slow wave sleep. Like some creatures like dolphins and many more, flamingo’s only one side of the brain sleeps at a time. Therefore, a flamingo can actually sleep while standing on one leg. While the portion of the brain controlling the raised leg rests when the bird wants to give the other half of its brain a break. It can simply change the legs and settle according to its comfort. It will be so effortless by their end.

Flamingos usually live and adapt to water. Water absorbs the heat much faster than the air. So, flamingos pull one leg close to their body and stand on the other to reduce heat loss and also maintain the body temperature.

Also, there is a theory by animal behaviorist Mathew Anderson, that this type of behavior of birds helps in managing heat regulation. According to his 2009 study, Flamingos also start standing on one leg when the temperature of the outside water becomes colder.

Scientists have proved this through research in which flamingos were made to stand on the force place to measure muscular activity. The results showed that their muscular activity was very low when they stood on one leg. So in conclusion it indicates that these attractive species can majorly support their body weight on one leg.

These are the reasons that prove why the flamingo stands on one leg but the scientists are still not satisfied with some experiments. So they also did an experiment with the deceased flamingo. In this experiment, they took two dead flamingos from the Birmingham zoo.

They try to put both the birds in the one-legged position. And they were able to stand up with no problem. This experiment is also able to prove the point that ‘Can dead flamingos stand up?’. The answer is Yes! This experiment results in the confirmation that flamingos feel comfort by standing on one leg even when they are asleep or dead. Their body feels comfortable in that position.

Flamingos are a really attractive species and especially the feature of standing on the leg really attracts so much attention. As I say it’s quite strange to see a bird sleeping this way. Suppose, you are sleeping by raising your one leg. Weird, right? But it’s true. Flamingos do stand on one leg. They are able to stand on one leg because they have hemispheric sleep patterns, more importantly, their bones evolve, reducing muscular fatigue, and providing stability. But these are the actual reasons that made them stand even more efficiently on one leg rather than two.

Also read: Unknown Facts You Should Know About Jim Corbett

Priyanshi Arora is a content editor for Healthy life human covering the topics related to health and lifestyle. She believes in having a positive attitude toward life reflects a healthy lifestyle. She has helped many people by providing valuable content related to their daily basic needs. To know more, connect with her on Linkdln.
PrevPreviousBest Oven Cleaner
Nextwhat is toffeeNext