Unknown Facts You Should Know About Jim Corbett 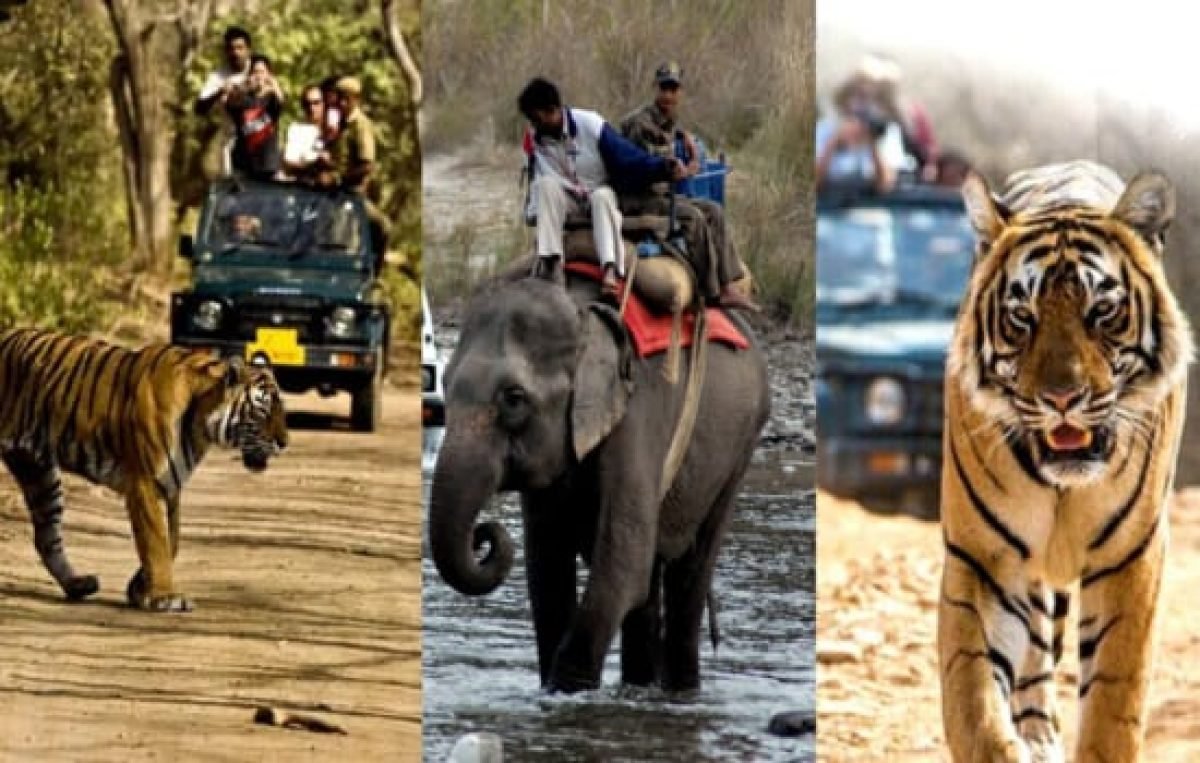 Experiencing India’s oldest National Park, Jim Corbett, is a once-in-a-lifetime opportunity for any traveler. Everyone feels mesmerized when they see the enticing beauty of the location and the breathtaking view of the forest. Seeing wild animals and birds in their natural habitat is surely a once-in-a-lifetime experience. The park, on the other hand, is lovely since there are so many things to discover. Does this imply that India’s most visited national park holds some secrets? To find out, continue reading.

Jim Corbett National Park, India’s first national park, is situated in the picturesque state of Uttarakhand. It is providing a lush environment for a variety of animals. It includes Asiatic Lions, Elephants, Spotted Deer, Leopards, and the famous endangered Bengal Tiger. The nature sanctuary, which covers 520 square kilometers, is home to approximately 600 species of flora and fauna. The Jim Corbett National Park is a ‘Garden of Eden’ with magnificent grasslands, marshes, ascents, and a deciduous forest. It is a spectacular wildlife habitat. It is India’s most popular wildlife refuge.

Jim Corbett’s name has become synonymous with India’s oldest and most famous national parks, as well as the cottage industry that has sprung up around them. In and around the forests of Uttarakhand, where the famed hunter-naturalist once lived and whose work led to the construction of the national park. Corbett’s name lives on in and around guesthouses, hair salons, general stores, and gift shops.

However, the park was not always known as Corbett. It was named Hailey National Park after Sir Malcolm Hailey, the governor of the United Province. When it was established in 1936 as India’s — and Asia’s — first national park. Shortly after independence, it was renamed Ramganga National Park, after the river that runs through it. And then renamed Corbett National Park.

Project Tiger by the conservation campaign in 1973

In 1973, the Indira Gandhi government began Project Tiger from Uttarakhand’s Jim Corbett National Park. India had a tiger population ranging from 20000 to 40000 at the turn of the century. Their numbers have decreased dramatically to around 1820 in the 1970s due to the Maharajas’ and British’s hunting habits, as well as poaching operations. The shortage of prey for these wild cats is another factor contributing to the population decline. The government has passed the Wildlife Protection Act in 1972 to conserve and preserve various species of flora and fauna. The Project Tiger initiative began in 1973 with the goal of raising the number of tigers (scientific name: Panthera Tigris) in the country.

The Jim Corbett National Park covers 520 square kilometers and is home to a diverse range of animals and birds. Let’s start with a look at the bird species that call Jim Corbett home. One of the most noticeable features of Jim Corbett is that it is one of India’s richest bird habitats, with over 600 kinds of resident and migratory birds, including a variety of waterside and water birds. Spotted Owlet, Crested Serpent Eagle, Himalayan Fishing Eagle, Steppe Eagle, Great Salty Woodpecker, Cinereous Vulture, Tawny Fish, Wallcreeper, Indian Alpine Swift, Larks, Mynas, Bayes, tailor bird, bulbuls, and many other species, you can see in and around the area.

It is the most popular holiday destination for tourists in India

Corbett National Park is a great place to visit if you enjoy nature and adventure. Jim Corbett National Park is the ideal weekend retreat if you want to get away from the hustle and bustle of the city. In open-roofed jeeps, visitors may travel through the natural habitat of the National Park, observing rare animals and the king of the jungle, the Tiger. The national park in Uttarakhand is lush with plants and trees. In addition, Luxury Hotels Group is a well-known experiential resort company with locations in picturesque destinations across Northern India and Goa. Recently stated that Corbett National Park, India’s first Tiger Reserve, has ranked second in the world’s most popular National Park category.

Tiger safari is the most known activity of the National Park

Photographers, animal lovers, and environment enthusiasts have long flocked to Jim Corbett National Park for a variety of exciting activities and jungle safaris. Many hotels in Jim Corbett organize jungle safaris to provide their visitors with a memorable Jungle experience. The chances of sighting a tiger in Jim Corbett are a bit less. Naturally in such a vast forest, on a limited designated road meeting, a tiger is a great coincidence. We can experience the wilderness of the jungle and can inhale fresh air. The meeting of the tiger totally depends on luck.

There are two slots for Jungle safari, one early in the morning and another in the afternoon. There is a slight change in the timings in summer and winter. Summer is usually the best time to see tigers because of the deciduous forest and the likelihood of seeing animals near water bodies. However, temperatures can reach 40 degrees Celsius.

Winter is generally pleasant, however foggy weather from December to January can make visibility difficult. In the park, there is a Jhirna zone that is open all year. The Birjani zone is open from the middle of October to the middle of June, and the Dhikala zone is accessible from November 15 to the middle of June. After dusk, the park’s gates close and there is no driving permission there.

You can book the slots from the official website for dhela zone. you can book Gypsy to reach Dhela zone and you have to show the reservation and id proof to the forest official and then they provide you a guide. The climate and environment are magical there.

Flora is abundant in Jim Corbett National Park. Sal forests cover more than 75% of the park’s total area. It is home to 600 plant species, including grass, ferns, climbers, herbs, shrubs, trees, and bamboo.

Corbett is home to Sal, Khair, Sissoo, and the only conifer known as Chir Pine. You can see Male Bamboo (Dendrocalamus strictus) in large numbers. You can see Flowering plants such as Kachnar (Bauhinia Variegata), Semal (Bombax Ceiba), Dhak, Madaar, or Indian Coral (Erythrina indica), and Amaltas (Cassia fistula) in and around the forest area of Corbett Tiger Reserve. Here you can also find artificially planted trees such as Teak (Tectona grandis), Silver Oak (Grevillea robusta), Eucalyptus Ber (Zizyphus), Maror Phali (Helicteres isora), and Jhau are examples of shrubs.

The only conifer in the park is the Chir pine (Pinus Roxburgh), which grows on ridge tops like Chir Choti but is quite low in Gajar Sot. Banj Oak (Quercus leucotrichophora), a Himalayan species, grows in the upper reaches near Kanda.

In Corbett National Park, the gorgeous Tiger isn’t the only wild animal worth seeing. A significant number of reptiles live in the park, including the Gharial, a fish-eating crocodile, and the Mugger, a marsh crocodile. The Ramganga River, which runs through the park, is suitable for these thick-skinned amphibious monsters. We can see amphibians ranging from long-snouted gharials to thick and hefty crocs around the riverbank. You can spend a few hours admiring their powerful jaws, scaly backs, and enormous noses that hide just beneath the water’s surface.

As the sun begins to set on the horizon, our Naturalists will lead you to the best vantage point from which you can safely observe the reptiles up close. The khaki color of the reptiles is excellent camouflage, but with binoculars and a little help from your eagle-eyed Naturalist, you’ll have no trouble finding them.

Once you get past their terrifying appearance, you’ll notice that crocs are just like any other animal, splayed one on top of the other and occasionally snapping at each other. You can witness their lethal hunting ability as they expertly catch fish and marvel at their interminable patience as they lie in wait for the next prey. But now One of Jim Corbett National Park’s lesser-known facts is that it is home to endangered reptiles such as the King Cobra and Mugger Crocodiles.

The world-famous Jim Corbett National Park celebrated its 85th anniversary in terms of wildlife conservation and biodiversity. Every year, tourists from all over the country and the world come to experience a jungle safari. The number of tigers in the area has also increased significantly in recent years. This Uttarakhand tourist destination is also a significant source of revenue for the state. Let us tell you some important and interesting facts about this park.

Although Corbett Park has been in operation for 85 years in terms of wildlife and forest protection, the forest department took over responsibility for this area’s forest protection 153 years ago. This forest area was also under British control until 1858. As the exploitation of forest resources increased, the effort to save it began in 1858. The Forest Department had the responsibility for the conservation of this area for the first time in 1868. In 1879, this area was designated as a reserve forest area.

In 1934, then Governor Sir William Haley advocated for the area to be protected for wildlife. Jim Edward Corbett was entrusted with the responsibility of determining its boundaries. It came into existence as the first national park of India on 8 August 1936 under the name Hailey National Park. Since then, gradually this area became the backbone of Ramnagar’s economy. Today the livelihood of thousands of tourism businessmen and shopkeeper’s rested on the tourism of Corbett.

This park has the most tigers of any Indian national park. Thousands of kilometers of breathtaking scenery. Keep an eye out for the Royal Bengal tiger, Asiatic elephant, bear, deer, otters, and other animals, as well as over 600 species of domestic and migratory birds. If you love nature and wildlife, you will feel mesmerized when you will experience this.

Priyanshi Arora is a content editor for Healthy life human covering the topics related to health and lifestyle. She believes in having a positive attitude toward life reflects a healthy lifestyle. She has helped many people by providing valuable content related to their daily basic needs. To know more, connect with her on Linkdln.
PrevPreviousHow to Rank on Instagram in 2022
NextShocking Benefits of Terminalia ArjunaNext