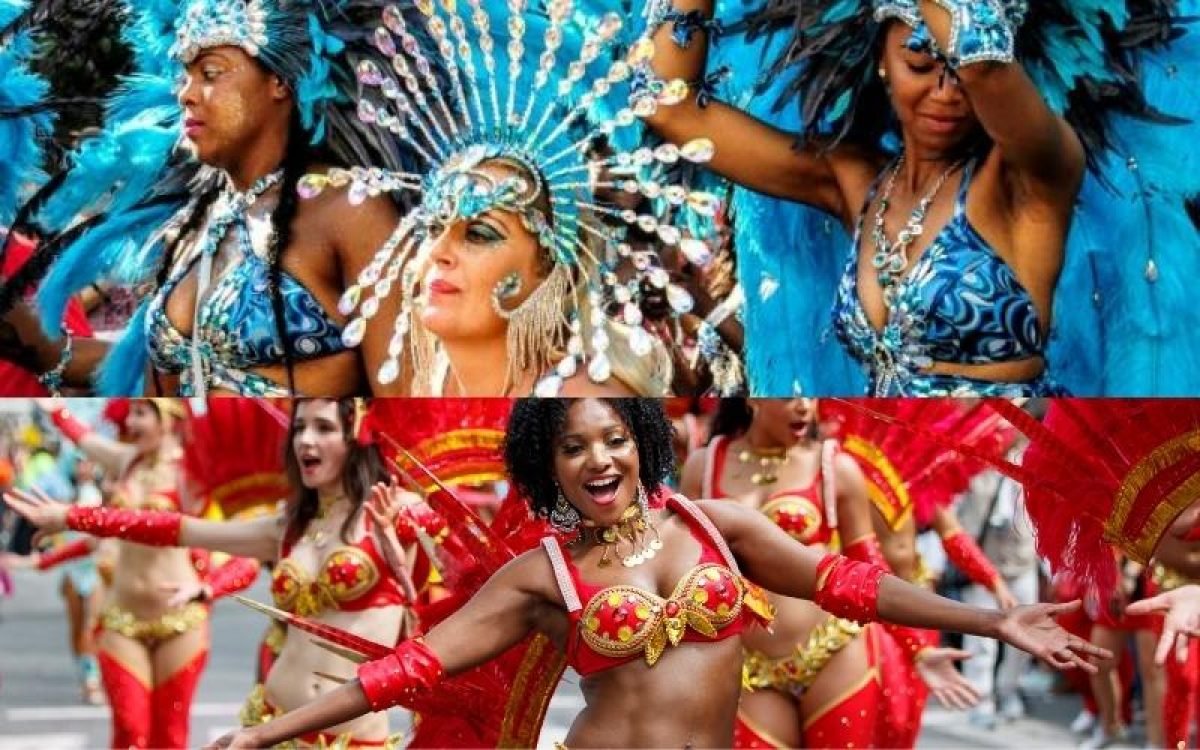 The Notting Hill Carnival is one of London’s biggest summer street festivals in London that celebrates Caribbean culture. It’s one of the biggest and most famous carnivals in Europe, and it draws huge crowds every year. Over the years the Notting hill carnival in London has developed and expanded to become a major event on the UK’s cultural calendar and thousands of people attend every year. The festival takes place over two days in August. This year’s carnival will be held from 27 August 2022 to 29 August 2022. There you will see spectacular parades featuring dancers, singers, musicians, colorful floats decorated in vibrant feathers and streamers, and many more.

Thousands of people will also come to watch the parade as it passes by the local streets too. In recent years the Notting hill carnival has become incredibly popular among tourists and London people and also many people are coming from all over the UK and Europe to participate in this popular festival. The event has become very famous in London’s calendar, with a colorful and vibrant atmosphere that makes it a must-watch summer attraction for all visitors.

Highlights of the Notting hill carnival in London include live music, dancing, food, and full of joy and entertainment. There are also huge events with over 100 rides and games, so there are plenty of things to see and do for all ages and interests. If you are looking for a great time out this summer. So there is no better place to be than the Notting Hill Carnival.

The first carnival was held in 1966. When a group of Caribbean immigrants formed a group called “The West Indians Social and Recreation Club”. The group organized a festival as a way of celebrating their heritage and creating a community spirit among people living in the area. It attracts hundreds and thousands of people every year and it is one of the biggest carnivals in the world.

Today, the Notting hill carnival is a celebration of the multicultural population of London and an opportunity to showcase the best music, dance, and culture from the Caribbean. The event features a range of performances by local musicians, DJs, dancers, and other performers as well as stalls selling food and arts and crafts. There are usually a number of sound systems set up along the streets so that people can dance to the sound of the music while the parade goes through the streets.

The festival takes place in West London around Ladbroke Grove and Westbourne Park at the end of the summer school holidays and lasts for five days. It features a colorful parade with bands and costumed dancers who perform in front of large crowds of spectators. There is also a lively programme of events and performances held in different locations around the region during the course of the week. The music featured at the Notting hill carnival in London includes a wide variety of styles including reggae, soca, calypso, and samba.

Also Read:- Everything you know about Johnny Depp

This year, the route will start on Ladbroke Grove and continue down Portobello Road until Westbourne Park. A funfair will take over the road outside Westbourne Library, where you’ll be able to enjoy all the fun of the fair with rides for the whole family. After a funfair takeover, the crowd will head back to Notting Hill Gate to continue the parade in the usual Way.

On Saturday 27th August, the parade will begin at around 10.30 am at Pembridge Road and finish at Paddington Street. This year’s theme is ‘Love is Revolution, celebrating the transformative power of love, as well as showcasing the unique diversity and creativity of London’s Caribbean community. There will also be a whole host of exciting music acts on stage to entertain the crowds throughout the weekend.

What You Can Expect This Year in Notting Hill Carnival London

This year’s headliners include Melody Gardot, who has performed at the Grammys, the Hollywood Bowl, and the Sydney Opera House, as well as reggae singer Gramps Morgan and the stellar steel band, Panorama Steel Orchestra. Of course, it would not be a carnival without plenty of delicious food to enjoy as well.

There will be stalls selling delicious jerk chicken, vegan burgers, and other tasty treats throughout the weekend to keep you well fed while you dance up a storm. And of course, no carnival would be complete without a stunning array of colorful costumes to feast your eyes on. This year will be no exception – visitors should expect an amazing selection of creative costumes inspired by the festival’s theme.

One artist that you won’t want to miss is the Big Bad Wolf, who will be headlining the night on Sunday with his unique brand of jazz-funk fusion. He is truly a master of his craft and he never fails to deliver an unforgettable performance. The artists who will be playing at this year’s event come from a broad range of genres and include performers from Jamaica, Trinidad & Tobago, the United Kingdom, and other countries in the Caribbean. They will be performing live on stage along with special guest acts and dancers performing in breathtaking costumes.

Reggae, soca, calypso, and samba are all music styles that originate from the Caribbean. They all have a different rhythm and sound and are often used to dance.

Also Read:- How to Get Ticket for Louder Than Life Music Festival 2022

What do these different sounds have in common?

They all come from the same place the Caribbean. Each of these musical styles has its own unique sound and feel to it. The rhythms tend to be fast and upbeat, which makes them great for dancing. They also share similar instrumentation, featuring lots of instruments like drums, congas, and steel pans. There are several regional differences in each of these styles. But they all share a lot of similarities too, making them an interesting combination of music forms from different parts of the world.

Also read: Veterans Day: When, Why & How to Celebrate

In recent years the Notting hill carnival has become incredibly popular among tourists and London people and also many people are coming from all over the UK and Europe to participate in this popular festival. The event has become very famous in London’s calendar, with a colorful and vibrant atmosphere that makes it a must-watch summer attraction for all visitors.

Rahul Rajput is contributing as a content writer to Healthy Life Human. His focus areas include SEO strategy, Google Ads, content marketing etc. He shares information on various topics related to health, lifestyle, fitness, education, career, business etc. He believes in providing information and knowledge to people that can add values to the their lives. He is very passionate about his health and do workout on daily basis. Connect with Rahul Rajput on Linkedin
PrevPreviousHow to Get Ticket for Louder Than Life Music Festival 2022
NextBest Kitten Food & Their BenefitsNext