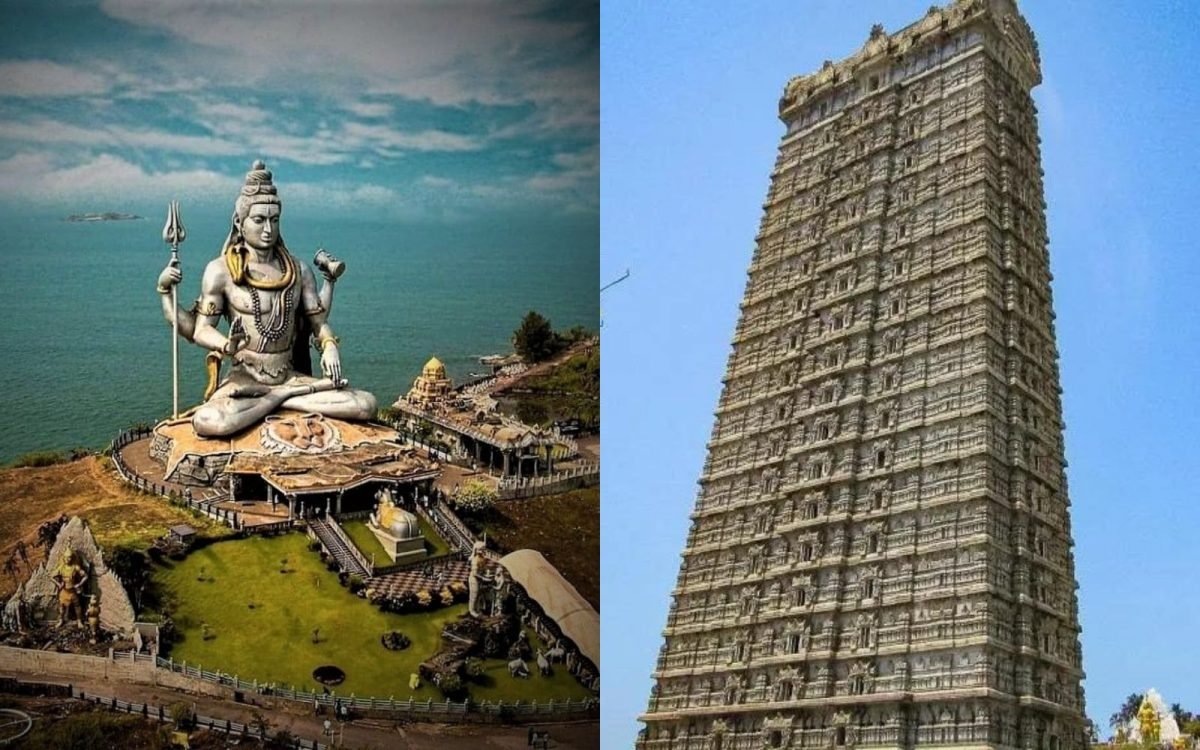 The Murudeshwar Temple is a Hindu temple dedicated to the God Shiva. It is located in the town of Murudeshwar, Uttara Kannada district, Karnataka, India. The temple is a popular tourist destination and receives millions of visitors each year. It is particularly popular with tourists from South India.

The temple’s name, Murudeshwara, refers to Shiva and reflects its significance. The fascinating Ramayana tale has been connected to the temple’s wonderful history. The king of Lanka, Ravana sits to meditate for worshipping lord shiv. As a result of which Lord Shiva Appears and asks Ravana to tell him, whatever he wants.

Ravana said to lord shiv that he wants Atma linga. Lord Shiva blesses him with the sacred Atma Linga and Shiva accepting his demand, gave him the Lingam but puts a condition before Ravana that if ever this Lingam will be kept on the ground, Lord Shiva will regain all of its powers.

This made Narada realize that with Atma Linga in his hands, Ravana would inflict damage on the earth by obtaining immortality, so he approached Lord Ganesha for assistance. While Ravana was on his way to Lanka, Lord Vishnu planned to remove the effect of the Sun’s light, making it appear as dusk, forcing Ravana to perform his evening rituals and place the Linga on the ground. While he was seriously considering the curse of Atma Ling, a Brahmin boy approached him and revealed himself to be Lord Ganesha.

In the process, he threw the case that was protecting the lingam to Sajjeshwara, which is 23 miles away, and the lid of the case to Guneshwara and Dhareshwara, which are each around 10 to 12 kilometers apart. And he threw the robe covering the Atma Lingam to Mrideshwara, who had afterward given the name Murudeshwar Temple.

If you’re visiting Murudeshwara temple, it’s worth checking out some of the nearby temples as well – they’re all quite beautiful and worth a visit if you have the time. Here’s a look at the best temples near the temple of Murudeshwara.

The temple has incredibly huge religious significance because it is the only temple in the world with a Linga in the form of Rudraksha. The Mahalingam is a 6-foot-long ‘Swayambhu’ (originate by self) Shiva Linga that is thousands of years old. The house of the Linga is over 500 years old, while other parts of the temple had built later.

The temple has a calm and peaceful atmosphere. The beautiful green surroundings and majestic landscape will enhance your visit to the temple. The temple grounds are well-kept and clean, making it an ideal location for meditation.

It attracts visitors from all over the country as a major tourist attraction in Mahabaleshwar. Tourists visit the shrine to see the majestic architecture and the one-of-a-kind Shiva Linga.

Throughout the year, Shiva devotees visit the temple. Navaratri and Maha Shivaratri, as well as other Hindu festivals, are generally celebrated widely. There are many popular tourist attractions in Mahabaleshwar close to the temple that can visit on the same day.

It is a refreshing and calming experience to take an early morning dip in the pure and holy water that flows down the Kodachadri hills. The only temple dedicated to Goddess Parvati is dedicated to Mookambika Devi. Mookambika takes the form of Jyotir-Linga, which combines Shakti and Shiva.

Every morning at 5.00 a.m., “Nirmalya Pooja” performs, and devotees have the opportunity to see the Swayambhoo Lingam during this time. Trikala Pooja is performed in the Temple every day. Thousands of devotees visit the temple for inner peace and to find solutions to their problems, sufferings, and difficulties.

Also Read: How to reach Kedarnath

Deepak Kumar is a professional Digital Marketer and business consultant to many startups. He loves to dig deep about business strategies, technology, fitness, automobiles, food, and travel. He is district level athlete as well. Connect with him on Linkedin for more.
PrevPreviousFirst Day of Navratri 2022: देवी शैलपुत्री
NextTop Temples to Visit During NavratriNext