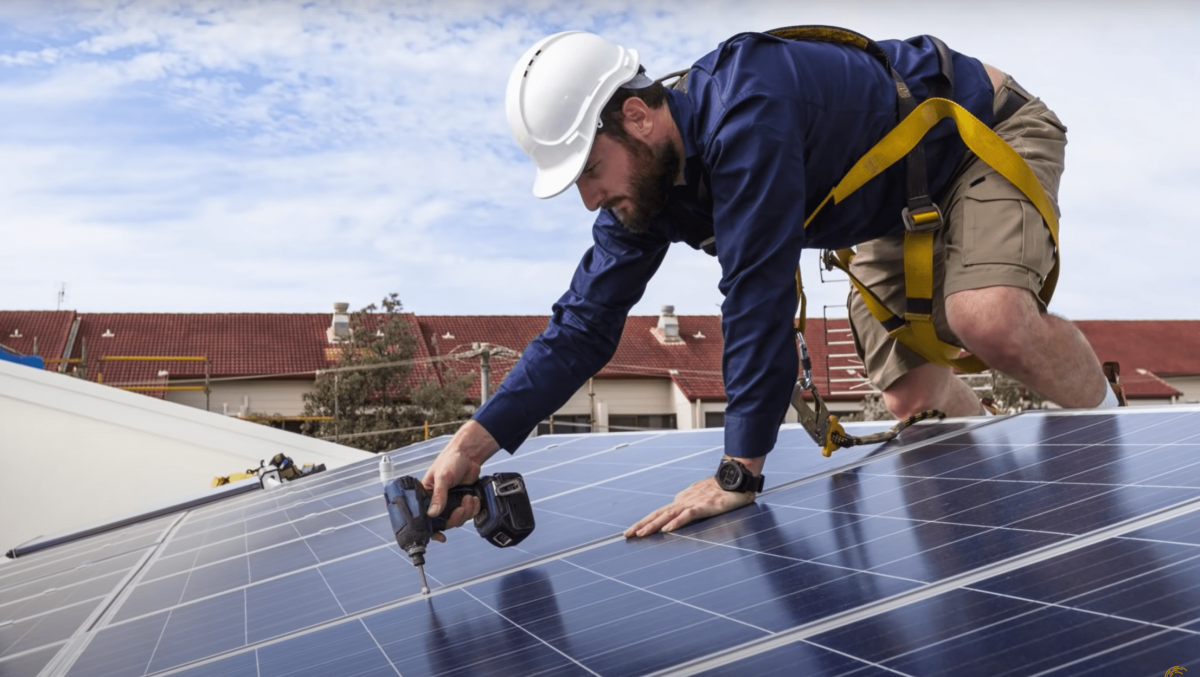 When you imagine the energy of the future, Solar power is probably in the picture. After all, it is reliable, and powerful & fuels the vast majority of life on earth. In recent years, less than 2% of the world’s electricity has come from Solar power so this is the best time to start an amazing business with Solar panels. Here are amazing ideas for Businesses with Solar Panels.

Here are 5 ways Solar energy could help power the future. You might think that vast, arid deserts are the perfect place to install solar farms. After all, desert sunlight is intense, and you don’t usually have to worry about clouds. Plus, there’s plenty of wide-open space. But there is one problem: Solar panels aren’t fans of heat.

How does Solar Panel work?

Solar Panels work by converting light directly into electricity.  When they absorb sunlight, that energy knocks electrons loose and those loose electrons create an electrical current. Which can capture and transfer to a wire.

The thing is Solar panels do that most efficiently at temperatures under 25 degrees Celsius. That’s because when the Solar Panels get hot. The electron gets heat up that extra energy from their environment. Which put them in a more excited state. And when they’re already excited, they have less room to absorb energy from the sun.

So, they actually work best in moderate climates-where unfortunately, it can sometimes be hard to find the space to set up a giant field of Solar Panels. But since the 2000s

With the increasing level of the population, the demand for energy is also getting increases. To fulfill that demand we are focusing on alternative ways of energy. That was the main purpose behind the invention of the solar pannel. But now this uses on a large level too. And there are multiple business ideas with the Solar Panels like:

In Agrivoltaics, Solar panels get installed over crop fields. That way, there’s no need to clear extra space, just for the Panels. And on top of that, the crops help keep things cool as they release water through their leaves. That release of water works just like sweating: Evaporating water removes heat from a plant, which brings down the plant’s temperature and also cools the surrounding area.

So, it can help keep things nice and balmy for the Solar panels. And makes them noticeably more efficient!

Researchers centered at the University of Arizona found that between May & July of 2019, Solar panels over croplands were 3% more efficient than Solar Panels in the same region that was not over croplands. That might not sound like a lot, but over time, those small game gains add up.

For a house or building operating on solar power. It would be about close to three days’ worth of electricity over those 3 months. This is the first way for Businesses with Solar Panels.

Engineers have also extended a similar concept to a setup called Floatovoltaics, in which floating Solar panels place on bodies of water, which are also typically cooler than the air and help keep the panels cool and working efficiently. As an added bonus, Agrivoltaics and floatovoltaics also open up lots of possibilities when it comes to finding space for a huge arrangement of Panels.

Setups like these already exist all around the world, and they’re becoming more popular.  If that continues, Agrivoltaics and floatovoltaivs could produce a significant fraction of the world’s energy in the future. Engineers are always trying to get as much energy out of solar panels as they possibly can. And one of the things they have to think about is exactly what direction a panel should be facing.

See, Solar panels produce the most energy when the Sun’s rays are hitting them head-on, rather than at an angle. So, traditionally, people have installed these panels at a fixed angle that gets the most direct sunlight at their specific latitude.

But that’s not a perfect solution, because the angle of the sun’s light is always changing depending on the time of the day and the season. This is the second way of Businesses with Solar Panels.

Also Read: Semiconductors and Its Applications in Market

That’s why engineers invented something called photovoltaic trackers. PV trackers move solar panels along tracks that follow the arc of the sun.  which makes sure the sun rays are always head-on so they’re always performing at their peak. To run these systems do use about 5 to 10% of the energy. They produce, but the energy gained outweighs those losses.

In fact, these amounts can boost the amount of electricity a solar panel generates by up to 45%. Depending upon geographic location. In places far from the equator, where the angle of sunlight varies significantly between summer & winter, PV trackers can be especially useful. They’re generally still too heavy to be practical on rooftops. Structurally, It should reinforce to carry something so heavy. But they are also used in other settings. This is the Third way of Businesses with Solar Panels.

Today, Most panels have a pretty conspicuous look. They don’t just naturally blend into their surroundings or the architecture. To whom they attached. But there’s only so much you can do about that. The most common solar panels have made of silicon, which is just naturally bulky and heavy. Silicon is great for turning light energy into electricity. Since its electrons are arranged in a way that makes it easy for sunlight to knock back them loose-but it’s not the option.

Some engineers try to find alternatives. Including Solar cells that could be embedded right in your windows. The idea is that you could be sitting by a window on a sunny day. And there’s light and warmth hitting you. But some energy of sunlight can convert into electrical energy…right in the glass. But for that to happen, Solar cells would need to be made of something way lighter than silicon and also something partially transparent.

Important thing to Note in business with solar window

Now by definition, a material that’s absorbing light is usually pretty okay. But organic Solar cells can be designed to absorb mainly infrared light, letting visible light pass through. So, these days organic cells are transparent. They let through about 43% of light-which is pretty dark. Compared to the windows in your home, but they could make a notice tinted window for an office building.

What’s great is that these are cheaper and easier to produce than silicon cells since they’re so lightweight. They could eventually be adapted for phone screens, camping equipment, or car roof. There’s a small catch: they are not nearly as efficient as silicon. They only convert about 13% of the sun’s energy. Still the fact they are so easy to apply means they could be installed in a greater number of places. Includes places that don’t currently generate any electricity.

In the future buildings might not be the only things decked out In solar cells- because now, researchers are working on solar fabrics and textiles that would have solar cells integrated into the fibers. The end goal is to generate just by walking outside. One method of the research is experimenting with is creating super tiny solar panels that can be embedded into the fabric.

In 2018 researchers in the U.K. created Solar cells measuring 3 mm by 1.5 mm. Basically the size of a flea. Then the tiny panels were embedded into yarn that was woven into clothing. The idea of the panels being small enough that the person wearing the clothing shouldn’t feel them. To test their invention, the researchers embedded 200 cells in a prototype- and they were able to generate enough energy to charge a Fitbit. This is the fifth way of Businesses with Solar Panels.

The Smartphone display is made up of

So, we were not talking about a huge amount of energy here. But with just 2000 cells, you could look up your smartphone with a wire. Which make up enough electricity to charge it. Believe it or not, the design is actually pretty subtle, too. Other fashion designers have incorporated solar panels into fabric in the past. But they are usually pretty noticeable which tends to turn people off.

Unless you want to put on a cool mask and really awesome jeans and then rollerblade like it’s cyberpunk times. Not all solar fabric has to be wearable. Though other companies have successfully embedded Solar cells into heavy textiles used for things like awnings and canopies, which have the benefits of actually sitting out in the sun all day long too.

Finally, most recent inventions related to Solar energy have focused on electrical energy, but some researchers have taken a different approach. They are focusing on using the Sun’s energy for thermal power. The kind of thing that heats our homes. The goal is to create a rechargeable battery made of chemicals called solar thermal fuels.

Solar thermal fuels absorb the sun’s energy. Store it in chemical bonds and then release it as heat at a later time. They can do that on command. When these fuels absorb sunlight, that new energy disrupts the chemical bond in the molecules and causes them to rearrange into a new configuration.

Now it always takes energy for molecules to form chemical bonds with each other, and this new configuration takes more energy so it traps all the energy the fuels have absorbed from the sun. This holds onto it. Like, researchers in Sweden developed a fuel that can store solar energy for nearly two decades. But as soon as you want that energy back, you can pass those molecules through a physical filter that acts as a catalyst to rearrange those molecules back into their original. That release all that pent-up energy as heat.

Sweden About Panels for more energy

In fact, the team in Sweden got the fuel to bump the temperature of its immediate surroundings by 63 degrees in just a few minutes. And the team is hoping to get that number even higher. So the idea is to develop a fuel that can release enough energy to heat a home. Businesses with Solar Panels And if the technology can get there, it sounds like a pretty great deal:

The fuel that starts on the roof of your home. Where it would absorb sunlight. Then, when it was time to turn on the heat, the fuel would pass through that filter, and the molecules would release all the heat they’d stored. The whole process is emissions-free. And the fuel can easily use over & over.

Neha Rajput is a content writer at Healthy Life Human. She has been an active participant in various exhibitions and competitions. She also has been awarded gold medals in the science stream at the national level. Also, she likes to share information on various topics related to health, fitness, business, technology, career etc. to the online users worldwide. You can find her on Linkedin.
PrevPreviousHow do actuators make human life easy
NextTwitter Spaces : A Powerful Tool for Connecting Millions of PeopleNext